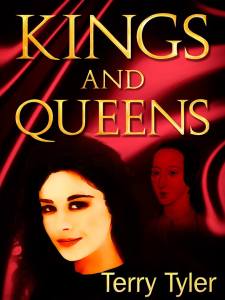 For 2015 I set myself a resolution – to add book reviews to my author site.  I am not a reviewer but I do enjoy reading, and I hope my suggestions make their way on to your shelves and eReaders this year.

So here is my first book review – Kings and Queens by Terry Tyler.  Buy it here.

Kings and Queens is Terry Tyler’s seventh novel and is a romantic drama spanning the years 1971 – 2007.  It follows the loves of charismatic Harry Lanchester, which just happen to mirror the story of Henry VIII and his six wives. All the passion and suspense of the Tudor court, but set in modern times.

Harry’s realm is his South of England property developing company, Lanchester Estates, while his ‘wives’ are the twentieth century sisters of their historic counterparts: Anne Boleyn is reincarnated as the equally intriguing Annette Hever, and Henry VIII’s fifth wife with the risqué past, Catherine Howard, lives again in 1999 as Keira Howard, a former lap dancer.

The saga is narrated by each of the six women, in turn, interspersed with short chapters from the point of view of Harry’s lifelong friend, Will Brandon.

Don’t worry if you know nothing of this period in history – “Kings and Queens” can be enjoyed as a contemporary family drama, very much in the vein of Ms Tyler’s previous novels. Readers with an interest in the Tudors, though, will pick up on many similarities, references and metaphors, some quite amusing. For those non-Tudor fanatics who would like a brief look at the life of Henry VIII before reading, the author has included, in the Kindle book, a link to a mini-biography on her blog.

This is the second book I’ve read by Terry Tyler and for the second time she held me captivated from start to finish.

How Terry has woven her tale into the Tudor history is pure genius. The story is narrated by Harry’s best friend, Will and Harry’s many wives, giving you a varied and powerful insight into the main character.  Each perspective has a unique voice with the young Keira (Catherine Howard) adding her thoughts in a diary format.

The story is strong, the characters are outstanding and the humour is perfect.

My children very often find me weeping over a book, and this one was no exception – the ending was so moving.

I can’t wait for the sequel.

HOT OFF THE PRESS – The Sequel ‘Last Child’ will be available this year.

4 thoughts on “Book Review – Kings and Queens by Terry Tyler”