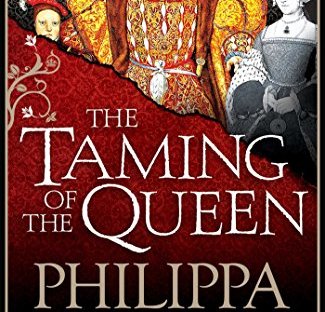 As I was getting to the end of this book, I began to worry about writing the review, not because I wasn’t enjoying it, but because it was so good I didn’t think I could do it justice!

Historical fiction is a relatively new genre for me to read. However, I’m no stranger to Philippa Gregory as I loved her Order of Darkness series.

The Tudor history has always fascinated me, and I have some non-fiction books on this era but, until now, I hadn’t read any historical fiction from this time. I probably should have started with The Constant Princess which is the first in The Tudor Court series, but fortunately, each book can be read as a standalone title.

Kateryn Parr is probably the least well known of all Henry VIII’s wives, and yet she was the only one to survive him. Philippa Gregory paints a beautiful picture of this young, intelligent woman as she is joined in wedlock with a man old enough to be her father; a king who has killed or abandoned all of his previous wives.

As a young widow, without children of her own, Kateryn Parr took it upon herself to bring Henry VIII’s children together under one roof and unite them as a family. This action saw Princesses Mary and Elizabeth reinstated into the line of succession, giving us our future queens. Apart from her devotion to family, Kateryn was well known for her studies and religious writing. (The original copies of the three books she wrote during her four years as queen of England can be seen at Studeley Castle in Gloucestershire.) As Kateryn becomes more studious, she unwittingly puts herself in danger. Gregory expertly weaves this storyline by showing us the sheer love of Reform and the English language Kateryn held and the fine line she walked by repressing her intelligence and bending to the king’s wishes.

The Taming of the Queen portrays Henry as a psychotic monster, who ruled his court with terror and mind games. You can’t help but feel for Kateryn as she becomes part of this world and lives in constant fear for her life.

Compared to her predecessors, Kateryn Parr could be classed as boring, but Gregory brings her character to life beautifully. There was quite a lot of religious aspects to this book which may slow the storyline for some people. I am not a religious person but I enjoyed reading about the studies Kateryn Parr undertook, and there is an emotional thread about the friendship between Kateryn and Anne Askew. If you are a fan of Philippa Gregory or the Tudors, then you will enjoy this book.

Why would a woman marry a serial killer?

Because she cannot refuse…

Kateryn Parr, a thirty-year-old widow in a secret affair with a new lover, has no choice when a man old enough to be her father who has buried four wives – King Henry VIII – commands her to marry him.

Kateryn has no doubt about the danger she faces: the previous queen lasted sixteen months, the one before barely half a year. But Henry adores his new bride and Kateryn’s trust in him grows as she unites the royal family, creates a radical study circle at the heart of the court, and rules the kingdom as Regent.

But is this enough to keep her safe? A leader of religious reform and the first woman to publish in English, Kateryn stands out as an independent woman with a mind of her own. But she cannot save the Protestants, under threat for their faith, and Henry’s dangerous gaze turns on her.The traditional churchmen and rivals for power accuse her of heresy – the punishment is death by fire and the king’s name is on the warrant…