Wow, what a summer! I’m one of those people who can enjoy every moment of my summer holiday, but then be as equally excited about the start of a new academic year – something to do with all that gorgeous stationery in the shops!

Before I launch into this blog post, I would like to take a moment to thank each and every one of you who visited, liked, commented, shared, and supported the incredible authors who took part in the Big Blue Blog Takeover while I was away. The variety of posts and interviews were incredible and judging from the stats and notifications I received when we sailed into Southampton (1759 emails!!), you enjoyed reading and interacting with the authors too. Thank you so much, it’s hugely appreciated.

I could happily share my 300+ holiday snaps with you all on this blog post as I am still buzzing from the incredible places we visited on our Mediterranean cruise, however, I’m fully aware that Paperchase will be open soon and I’ve got my eye on a few notebooks, pens, folders, and other stationery must-haves, so I’ll keep it short-ish! 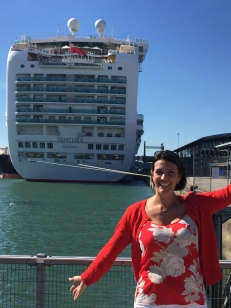 There was one particular place of interest that we visited which I felt compelled to write about, and that is the ruins of Pompeii.

There was a smattering of clouds in the sky on this particular day which was a pleasant change from the 37-degree heat we had in Rome the previous day.

Everyone has heard the stories about the fall of Pompeii. The tales told about the entire destruction of a complete city and its people. Doctor Who fans will remember David Tenant and Catherine Tate attempting to rescue a family from the devastation of Mount Vesuvius in the episode entitled ‘The Fires of Pompeii’ (2008), and if you’ve ever watched the film, Pompeii, staring Kit Harrington, then you’ll have a fictitious idea of the day to day life of the inhabitants and the gladiators of that time (and an imprint of Kit’s six pack forever burned into your memory bank!) 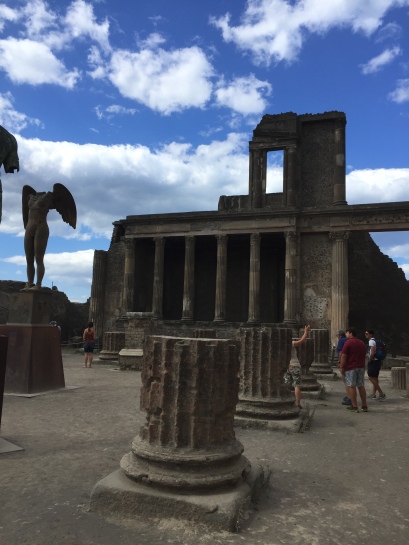 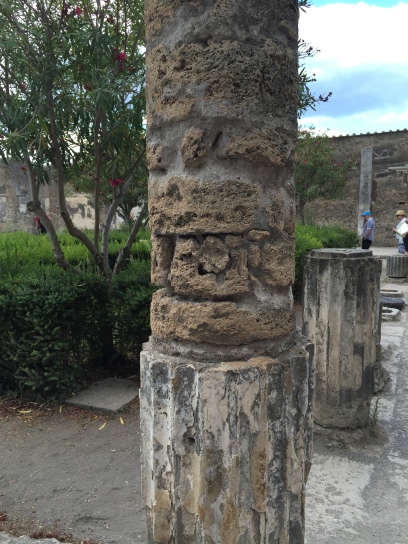 I knew bits and pieces about the history of this pocket of Italy, but I hadn’t taken the time to delve deeper into the origins of Pompeii before the famous disaster and destruction. For example, did you know that Pompeii was hit by a terrible earthquake in 62 A.D., which left the city in ruins? The Pompeians who survived were in the process of completing the rebuilding when Vesuvius erupted.

When we booked our trip to see the ruins of Pompeii I believed that this was indeed what we’d see – ruins. A few clumps of rock and an artist’s impression map of what it once looked like. I was not prepared for the opportunity to walk down city streets, visit family homes, the local bakery and public house, and huge villas, to stand inside an amphitheatre, or to come face to face with the victims of that fateful day. 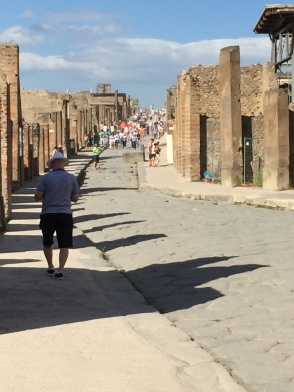 As it happens, we had the best guide on the planet. Vito is the Godfather of Guides – no joke, every other tour group leader we came into contact with stopped to shake his hand, kiss his cheek, and tell their group how this stylish, handsome gentleman was their mentor. Vito has given tours across the world to the likes of Tony Curtis and Bill Clinton. He was hilarious, gracious, and left you feeling like you had become an integral part of Pompeii history by just walking the cobbled lanes. He told me he is due to publish a book about his life as a tour host – I must hunt it down!

Vito escorted us through the streets of Pompeii pointing out the family names that have been erected outside certain buildings. During the excavation process, the archaeologists were able to discover which family lived in which house from their possessions and records. He explained the importance of the raised cobblestones which allowed the people to cross the street in bad weather when the rain would run down the streets. We saw the deep grooves in the stone left by chariot wheels, and the incredible architecture of this early period. 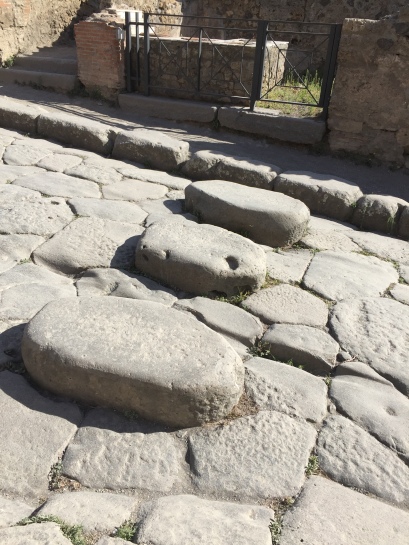 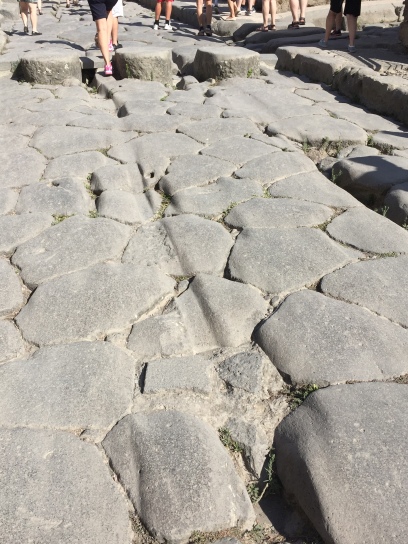 It was the 23rd August 2016 when we visited Pompeii – 1,937 years ago the people of Pompeii had no idea that their world was about to end.  Shortly after midday on August 24th 79 A.D., Mount Vesuvius erupted with savage violence. The flames from the volcano soared high into the sky, and an immense black cloud blocked out the sun. Red-hot scoriae, and volcanic matter smashed down on the town then the ashes mixed with water and extinguished all forms of life. There were earthquakes, tidal waves, and apocalyptic lightning. At this stage, people were still trying to flee but were overtaken and killed by poisonous gases which spread everywhere. The inferno lasted for three days, and then all was silent.

Vito explained how the people in neighbouring settlements (far enough away to escape the destruction) such as Misenum, witnessed the end of Pompeii. To watch such an incredibly brutal show and be unable to help your fellow neighbours must have been horrific.

To see the ruins of Pompeii and the volume of the city that has been excavated is truly inspiring. To also be able to view some of the fantastic wall paintings that survived is wonderful. Although, I had to giggle when Vito took us to the local brothel and pointed out the well-preserved paintings on the walls – it was a ‘menu’ of what was on offer within the establishment. My kids practically ran through this building! He also took great delight in pointing out the 3D phallic symbols on the side of buildings and carved on the street, that pointed the way for any of the gents of Pompeii who may be in need of a little of what you fancy! (The ‘arrow’ points the way!) 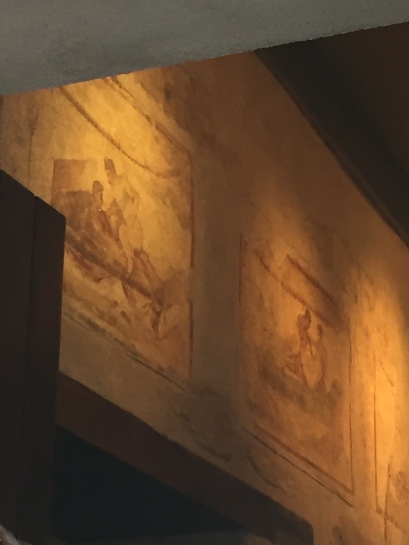 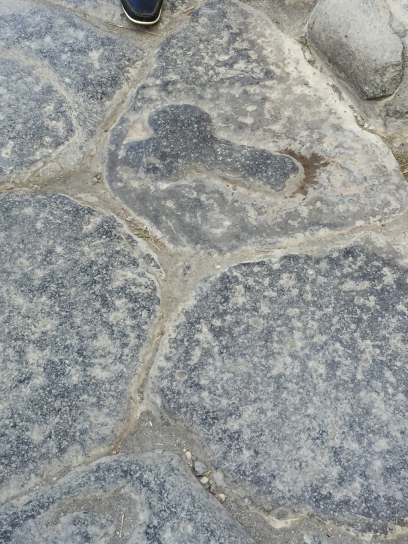 As I mentioned earlier, I wasn’t prepared for such an interactive historical experience, and I was totally blown away by everything I saw in Pompeii. The most incredible part of the tour, for me, was when we were ushered into a small room which housed a single glass cabinet. Inside was the cast of a young pregnant woman. An archaeologist discovered that the huge mounds of ash that fell and buried Pompeii for hundreds of years before it was re-discovered, formed a natural vacuum around objects – including people. He was able to drill a small hole down to where an object was and pour plaster into the vacuum, creating a perfect plaster cast. The team was then able to dig up these objects including many of the victims.

To say I was emotional is an understatement. This poor young woman is stretched out as if she has stumbled; her arm is extended as she tried to break her fall. There was another victim discovered in a seated position with their head in their hands. What must have been going through their mind? Did they believe the entire world was ending? It is remarkable what these archaeologists have achieved, and it brings history to life in such a personal, and emotional way. 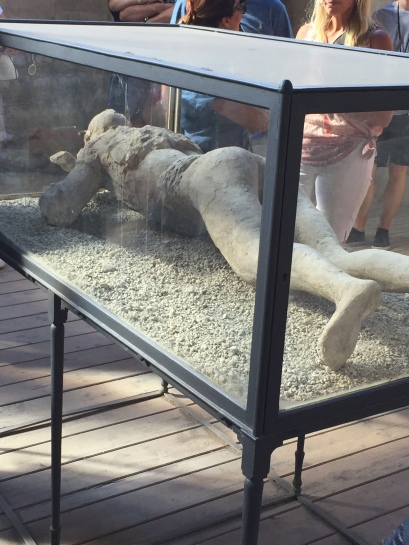 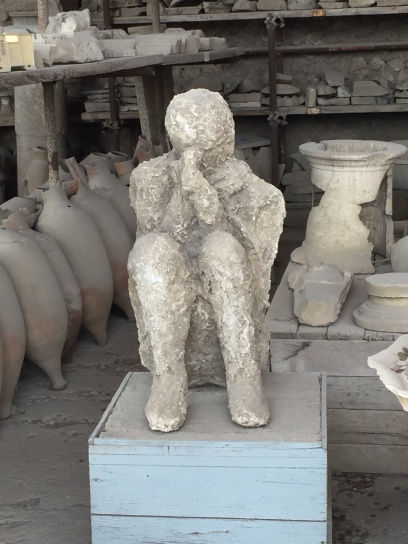 If you ever get the chance to visit Pompeii, I would urge you to go. It is such a wondrous place with an abundance of things to see; art, paintings, and beautiful views of the countryside – plus the imposing volcano, Mount Vesuvius, in the background.

I hope you enjoyed this brief glimpse of Pompeii; I’d love to hear your thoughts – or maybe you’ve visited the site yourself and can tell me what you think.

21 thoughts on “Falling in love with Pompeii #History #Travel” 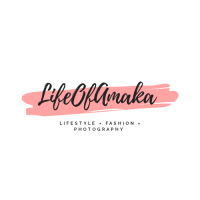